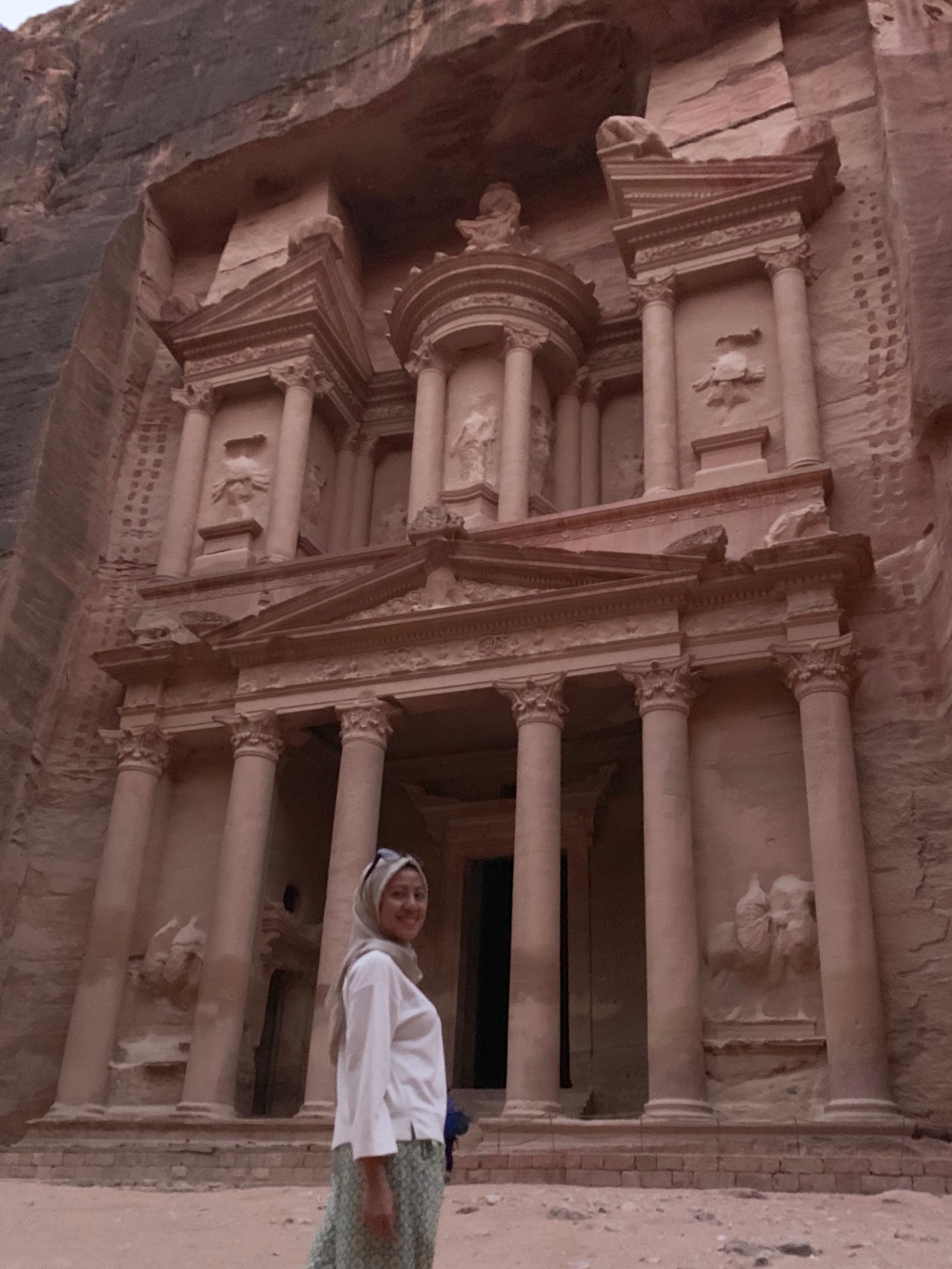 We flew to Jordan from Luxor with a transit in Cairo as there is no direct flight. We arrived around 1am with intention to visit Amman ruins and Roman wall after we checked into our Hotel. However my friend’s luggage was missing so we had to spend more time at the airport to report etc. my friend is not the only person missing her luggage, there are also other passengers missing their luggage. I was later told by our driver that it was a very common problem for flights to Jordan.

We took airport Taxi to our hotel and the drive took 45 minutes. Our Taxi driver was nice but he was coughing and smoking all through the ride with his window open. It was not a pleasant experienced for us. So eventhough the car is metered It is better to have private transport arranged or car transfer from Hotel. We arrived in our hotel almost 4pm, too late for city excursion so we decided to just take some rest in our room as we have a big day tomorrow.

We are staying in Fairmont hotel in Amman. A very nice hotel with a very good hospitality. I try to go for accor hotel chains whenever we travel as I have accor membership. Fairmont is my favourite hotel if I am looking for luxury. We do not have much time in Jordan. With time spent on flying in and out we literally only have 1 full day in Jordan and we want to spend it in Petra. Ideally it is more efficient to go straight to Petra from airport but all the good Hotels near Petra was fully booked. Only Petra Guesthouse was available for one night. So we decided to stay one night in Amman, go to Petra the next day, stay one night in Petra and fly to airport from there.

Well fed and ready we head to Petra using transport from the hotel at 8am. We had one stop for toilet break and coffee for driver. We arrived in Petra almost at 10.30. Petra Guesthouse is located next to the entrance. We checked in and drop luggage and queue to buy tickets

we took the brochure as we bought the ticket. The brochure is pretty informative with a map of Petra and explanation on the various trails in Petra

Petra is a famous archaeological site in Jordan’s southwestern desert. Dating to around 300 B.C., it was the capital of the Nabatean Kingdom. Accessed via a narrow canyon called Al Siq, it contains tombs and temples carved into pink sandstone cliffs, earning its nickname, the “Rose City. The Petra complex itself sprawls over 60 sq. km among the Petra Mountains and if you want to see it all you need a good 3 days. So if you only have less than one day like us you have to pick where you want to go beyond the Treasury.

Numerous findings have been made in the decades since, including the 1993 discovery of Greek scrolls dating to the Byzantine period as well as the more recent documentation via satellite imaging of a previously unknown monumental structure buried beneath the sands of the area.
When Petra was named a UNESCO World Heritage Site in 1985, Petra Bedouin tribespeople who had made homes for themselves within the city’s remaining ruins were forcibly relocated by the Jordanian government.
In the early 2000s, the site was named one of the “Seven New Wonders of the World,” leading to a spike in tourism. Since then, efforts have been made to protect the ruins of Petra from heavy tourism, as well as damage from floods, rain and other environmental factors.

After the eighth century, when Petra was largely abandoned as a trading center, its stone structures were used for shelter by nomadic shepherds for several centuries.
Only in 1812, the unique ruins of Petra were “discovered” by Swiss explorer Johann Ludwig Burckhardt. He described the ruins of the once-great city in chronicles of his travels.
With the western world now aware of their existence, they soon attracted the interest of architects and scholars, among others. Starting in 1929, British archaeologists Agnes Conway and George Horsfield, as well as scholars Tawfiq Canaan and Ditlef Nielsen, launched a formal project to excavate and survey Petra.

Getting to the famed Petra Treasury involves a 2.2 km walk from the Petra Visitor Center. The first 1.2 km of the journey is along a wide canyon with ruined temples and buildings on either side. The views along this route can easily be overlooked as everyone is rushing towards the Treasury but it shouldn’t be. Many of these buildings represent the best version of the Nabatean architecture.

There are few ways to explore Petra:

1. On foot/walking. It is the best way but be realistic on time needed and fitness level. The weather also plays important part. We were in Petra late October and temperature is pleasant around 20C

2. Horse ride. There is a horse ride offered from Visitor Center to the horse stable which is only 1.2km

3. Horse Carriage from Horse stable to Treasury. The walk to Treasury from visitor center is slightly descending so it is a nice walk. I don’t recommend taking a horse carriage on the way to Treasury because the horse is carriage is speeding down to get to the Treasury and you will skip the beauty of walking thru the Siq and the rush excitement to see the Treasury. Most people take the horse carriage on their way back. If you intend to do so you need to be at Treasury the latest by 5pm. We reached Treasury at 6pm on our way back and they were gone by then.

4. By Camel. You will see them when you arrive at the Petra Treasury. They also make a good photo opportunity as they sit in front of the Treasury. You can hire them to visit the lower levels of Petra. The camels are an iconic symbol and tend to be better cared for than the horses. They are allowed at the entrance to Petra for photo opportunities.

5. By Mule/Donkey. Most people who hire a Bedouin guide in Petra will have access to a donkey. Hiring a Donkey in Petra also means that you can travel to the higher places within Petra with kids, such as the Monastery and the High Place of Sacrifice. You will find many donkeys after you walk past Treasury. This was our option of choice to go to the Monastery as we do not have much time.

The Siq.
The ancient main entrance leading to the city of Petra, starts at the Dam and ends at the opposite side of the vault, a split rock with a length of about 1200m and a width of 3 to 12m, and height up to about 80m; most of the rock is natural and another part was sculptured by the Nabataeans. The main road that leads to the city, starts from the Dam and ends at the Treasury. It is a rock canal that measures 160 meters in length, 3 to 12 meters in width and reaches up to 80 meters in height. The main part of the Siq is created by natural rock formation and the rest is carved by the Nabataeans.

Treasury (Al-Khazneh) is one of the most elaborate temples in Petra, a city of the Nabatean Kingdom inhabited by the Arabs in ancient times. As with most of the other buildings in this ancient town, including the Monastery (Ad Deir) this structure was carved out of a sandstone rock face. The structure is believed to have been the mausoleum of the Nabatean King Aretas IV in the 1st century AD. It became to be known as “Al-Khazneh”, or The Treasury, in the early 19th century by the area’s Bedouins as they had believed it contained treasures.

Most people stop here especially if they go on a package tour buy we walked beyond Treasury and passed thru amphitheatre, Colonnaded street, Royal tombs, The Nymphaeum (semi circular Great Temple, Qasr al-Bint, Lion triclinum and finally reached the Basin which is at the bottom of the stairs going to Monastery. There 1 full restaurant near the museum called the Basin which serve buffet from 12.00 to 15.00. This is where stopped and have lunch before going up to The treasury.

We have planned to ride a donkey to go to Monastery to save our energy. We have read a lot about animal treatment in Petra and we chose donkeys whick look healthy and well treated.

What we failed to research is what was it like to climb with a donkey and only one man actually handle 3 donkeys all together. The ride was scary for me and even more scarier for my 2 friends. My donkey was chosen to lead the way and I think he was the smartest. Despite my donkey always seem to chose the path closer to the edge but He really knows where he is going. However the path is not that wide and we have to encounter many people walking down and I felt so bad that they have to always make way to the donkeys. Two third of the way our donkeys stopped and we got off and continue to climb up to the Monastery

The Monastery is one of the largest monuments in Petra, measuring 47m wide by 48.3m high. It was built on the model of the Khazna but here the bas- reliefs are replaced by niches to house sculptures. A columned portico extends of the façade; the interior is occupied by two side benches and altar against the rear wall. It was used as a biclinium for the meetings of religious associations. And dates to the early 2nd century AD, during the reign of King Rabel II. In the hall was reused as a Christian chapel and crosses were carved in the rear wall thus the name “Monastery” (Dayr in Arabic)

We walked back to The Treasury with stopping here and there for areas we haven’t managed to explore. It was after five as we reached Treasury and many peoole have already gone and leaving the Treasury almost empty

Sadly the horse carriage have also gone so we had to ascend on foot for another 2.3km to the visitor center lol. We were so tired as in total we walked 15km and decided to skip Petra at night. I don’t think my feet can take me to do another km of walking 😦

About Petra Guest House. Don’t let the name guesthouse fool you. It is actually a four star hotel run by The Crowne Plaza. It is one of the 2 luxurious hotel (another one is Movenpick) located near Petra Visitor Center. There is a budget option called Petra Moon Hotel also around the area. Most people stay in Wadi Musa, a small town 10-15 minutes drive from Petra. It is a blessing to stay in a hotel closed by after doing so much hiking and to have some luxury.

We left the next day around 10am after breakfast. We took a longer route passing thru dead sea on the way to the airport. The road was hilly but the view of the rocky dessert is so beautiful

There is so much to see in Jordan and you shoukd spend 5 days to really explore. But if you do not have time like us than you should just focus on Petra and come back another time for a longer vacation.

Jordan is expensive compared to Egypt. Especially Petra. Buying a Jordan pass is a good idea of you are going to stay in Jordan for more than 3 days. This last trip to Jordan ends our 2 weeks girlstrip holiday and Petra is definitely the top highlight of our trip ❤️

iThere are no comments

This site uses Akismet to reduce spam. Learn how your comment data is processed.